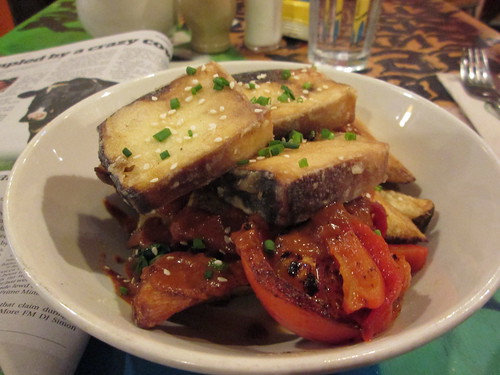 Revel‘s self-titled vegan big breakfast has been on the menu for a few years now, but over that time there’s been a gradual shift in what arrives on your table when you order it.

So I went yesterday, and can report that the Vegan Revellers is currently: a stack of lightly-battered soft tofu with grilled tomatoes and capsicum, on a pile of slightly crispy slow-cooked potato wedges. There are sesame seeds and green onions; there’s no toast or gluten. It’s not as huge as it’s sometimes been, but it’s substantial and tasty.

Previous versions of the Vegan Revellers have included: 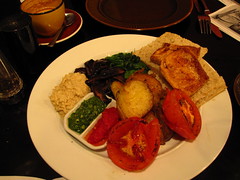 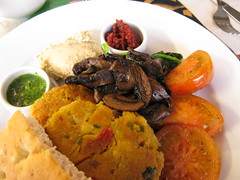 This site uses Akismet to reduce spam. Learn how your comment data is processed.

Today’s recommendation if you need to eat your extended lockdown feelings & those feelings taste like cookies: get @chunkdcookies to courier you a box of their freshly-baked treats! I had this speculoos-flavoured one for breakfast dessert & it’s made this gloomy morning a bit nicer. A couple of other cookie bakers you could also check out: @thevegantreatory & @willowcakebar 🍪💛
I’ve so appreciated @prepplantbasedmeals this lockdown - having a few easy, delicious frozen meals in the freezer has been a real comfort on days when I’m crosseyed from too much screen time & can’t work out what to cook. My favourites so far: the breakfast hash cup, bangers & mash, mini burritos 💚
Wherever you are, I hope you’re managing okay in these strange pandemic times. If you’re between South & Central Auckland, one coping mechanism I can recommend is ordering a box of pastries from @thegoodbakernz 😍🥐 Pictured: a rhubarb turnover; a cheese & mushroom brioche. Both were very nice.
Pizza from @tart.bakery for lunch 🍕😍
Another delivered treat: scramble mini breakfast burrito from @prepplantbasedmeals (& coffee with @coffee_supreme beans). Such a good way of starting the day.