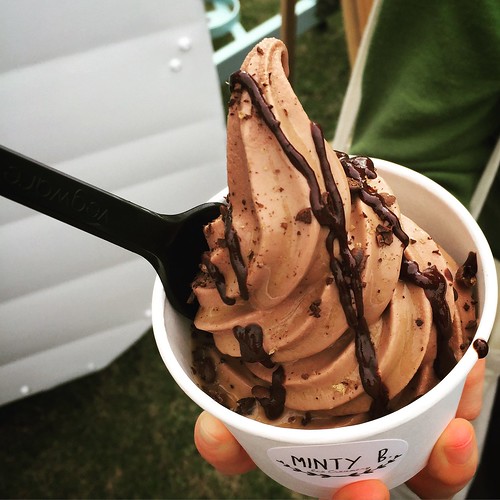 I feel like this blog has come full-circle. Back in 2008, I decided to start writing about Auckland’s vegan food scene after noticing that animal-free options seemed to be disappearing from café menus around town. I recounted in this blog’s very first post the story of going to a vegetarian festival and barely finding anything vegan – even the tofu pie had cheese in it!

All these years later, I still can’t fathom why you’d combine tofu with cheese, but I’m much more able to laugh off those bizarre lacto-ovo concoctions. In large part that’s because I’m not so hungry: vegan food is everywhere in Auckland, it’s getting more common to find already-vegan options on café menus rather than having to negotiate something special, and we have our own events now. Three new regular vegan food events have started in the last month. All three launch events were bustling with vegan and vegan-curious crowds, eager to try everything.

The photo above is just one of many that capture this no-more-tofu-and-cheese-pies moment in Auckland history: it’s a vegan affogato, made with Kokako cold brew on chocolate coconut soft serve icecream, topped with chocolate shell and ground coffee beans. From Minty B, a vegan icecream caravan that appears at events and around town. 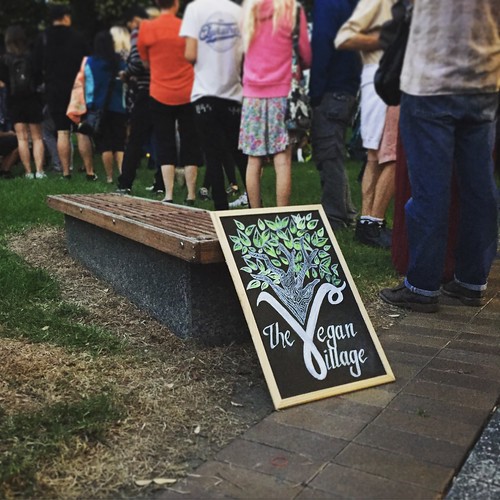 The first of these three events: Vegan Village. Hosted as part of New Lynn Night Market, Vegan Village is running a series of vegan evenings on the last Thursday of each month. Vegan food stalls – 15 of them for the first event – take over half of the night market, while some of the regular omni stalls also offer vegan options.

The launch event was packed, and most of the vendors sold out of food, doing their best to serve long lines of hungry vegans. Facebook discussion afterwards claimed that even the vegan-friendly takeaway place across the road, Mexicali Fresh, had trouble keeping up with the crowd of event-goers who arrived too late to wait in line. 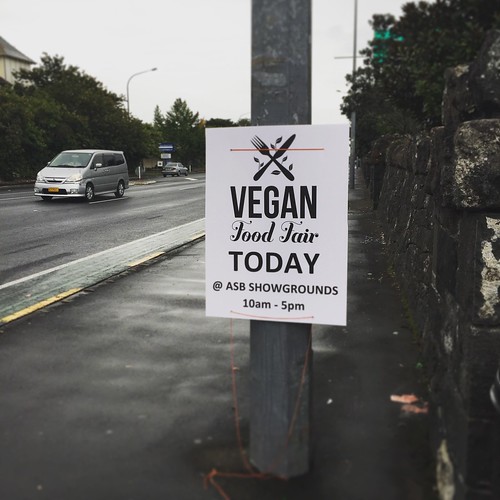 Second: Vegan Food Fair. This was a proper mainstream-style food festival, held at ASB Showgrounds, with more than 50 vendors, massive crowds (an estimated 6,000 attendees), children’s entertainment, free samples and everything.

Like the Vegan Village, vegan demand outstripped supply and some of the vendors were starting to sell out of food by mid-day. We arrived reasonably early and ate well; some of my favourite things were the aforementioned vegan affogato, white chocolate and fig cake (from The Nourishing Baker), tempeh phish & ficken satay (from Nusantara), feijoa raspberry cake (from The Nutty Spoon), single-serve dumplings (from Mr Shankly’s) and raspberry cake (from La Petite Noix).

Following the success of the first event, Vegan Food Fair will be reappearing on 6 November 2016, to celebrate World Vegan Day. They promise more space next time, and even more food.

More about Vegan Food Fair: a Radio New Zealand interview with the organisers. 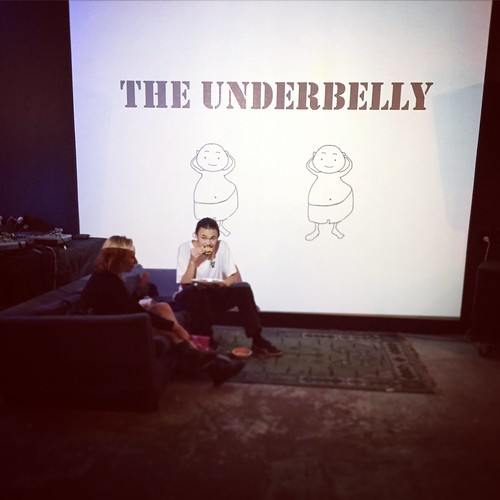 And thirdly: The Underbelly. A much smaller affair with more of a punk DIY vibe, The Underbelly took over the back room at K Road’s Whammy Bar for an evening to make vegan meals in the same space where little shows & Auckland Zinefest side events & activist community meetings have happened at other times.

The first Underbelly was Nusantara and Mr Shankly’s cooking side by side. I had vegan fried chicken and a big bowl of wedges before leaving full & satisfied; if I’d stuck around there was a punk festival happening in Whammy’s other two rooms later that evening.

The Underbelly and friends is happening on Sunday 1 May (as part of the Open Streets K Rd event). It promises to be bigger and better than last time – keep an eye on the Facebook event for announcements about who’s appearing and what they’ll be making. 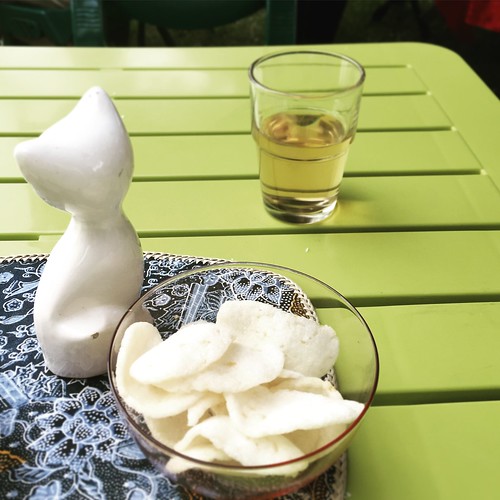 One common denominator across these events is Nusantara Indonesian Tea Café: Shasha was one of the organisers behind Vegan Village and The Underbelly, and served food at all three. I posted about Shasha’s successful Kickstarter fundraiser last year. Since then, it’s been exciting to see her business grow and the connections she’s made with other owners of new vegan businesses. Keep an eye on her Facebook page for news about her latest plans.

And if you’re not following me on Instagram, check that out too for more pictures of these events and all my latest discoveries.

Another sign of changing times since I first started blogging here: I can’t keep up with eating all the vegan options I learn about, let alone writing about them. But I’m also no longer the only person regularly sharing local vegan options online. For a few more places to find news, follow #aucklandvegan on Instagram for other people’s posts, the Auckland Vegans group on Facebook, The Vegan Society, and A Guide to Vegan‘s supermarket discoveries.

What are your favourite ways of finding vegan food in Auckland? Let me know in the comments section.